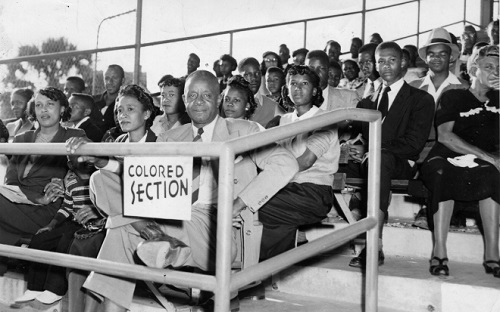 The Civil Rights Movement was a mass protest against racial segregation and discrimination in the United States of America. Its goal was to secure African Americans equal access to opportunities and rights as other U.S. citizens. The movement accelerated its pace during the 1950s but it has its roots in the effort of African slaves to free themselves from the chains of slavery and to abolish its institutions. Among earlier civil rights activist and abolitionists were Frederick Douglass, Harriet Tubman, William Lloyd Harrison, Sojourner Truth, Wendell Phillips and Garret Smith among others.

After the Emancipation Proclamation by President Lincoln and during the Reconstruction period, the federal government had a strong presence in the South protecting newly freed slaves and guaranteeing their right to vote. Newly created institutions prepared them with skills and educated the young. However this effort was short lived as political compromises in Washington led to the withdrawal of federal troops from the South. African Americans were subjected to Jim Crow laws, a set of laws that ensured they stayed segregated and aimed at preserving slavery. Jim Crow required the separation of whites and blacks in parks, restaurants, schools, public transportation, work and also prohibited interracial marriage. The Supreme Court ratified segregation in Plessy v. Ferguson by establishing the “separate but equal” policy.

The demand for equality quickened in the 1950s with petitions for equal education such as in the Brown v. Board of Education case in 1954. The death of Emmett Till awoke resolve and determination in black leaders to organize themselves into organizations such as Student non violent Coordinating Committee (SNCC), Congress of Racial Equality (CORE), National Association for the Advancement of Colored People (NAACP), and Southern Christian Leadership Congress (SCLC) among others. Civil Rights leaders such as Martin Luther King Jr., Phillip Randolph, James Farmer, Rosa Parks, John Lewis and Roy Wilkins emerged to lead the movement.

Rosa Parks’ defiance of Jim Crow Laws segregation in public transportation led to the Montgomery bus boycott which mobilized the entire African American community in Montgomery and lasted 381 days. In Browder v. Gayle the Supreme Court decided that the Montgomery segregation law violated the due process and equal protection clauses of the 14th Amendment.

During the 1960s Sit-ins and Freedom Rides were organized to challenge local governments to comply with federal law. Voter registration programs such as the Freedom Summer in Mississippi and Selma promoted voter education in primarily black communities. The March for Jobs and Freedom in Washington DC was organized to pressure the Kennedy government into passing a new Civil Rights Act. All these efforts were coordinated by Civil Rights organizations. During marches and voter registration drives protesters were attacked and lynched by local troops which drew national and international attention. Civil rights activists used non violent protest and civil unrest to engage the federal government into passing new legislation such as the Civil Rights Act of 1964, Voting Rights Act of 1965 and the Civil Rights Act of 1968.