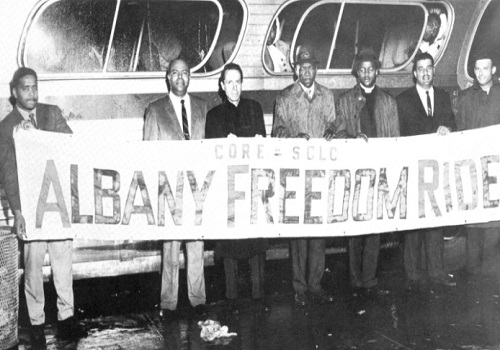 A group of CORE freedom riders protesting in Albany, Georgia.

Freedom Rides were modeled after the 1947 Journey of Reconciliation which tested the Supreme Court decision of Morgan v. Virginia that declared that segregated seats in buses was unconstitutional. Black and white CORE workers rode buses through the upper south facing very little violence and only a few arrests. 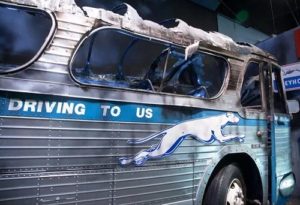 James Farmer, director of CORE called for volunteers to join in Freedom Rides but this time through the Deep South challenging segregated bathrooms and restaurants at bus terminals as well as drinking fountains and waiting rooms.

On May 4, 1961 thirteen volunteers -seven black and six whites- boarded a Greyhound bus in Washington D.C. heading for Alabama, Louisiana and New Orleans as their final destination. They planned to arrive at New Orleans on the 17th of May to celebrate the anniversary of the 1954 Brown v. Board of Education decision which ruled that segregation in public education was unconstitutional. The Freedom Riders faced no problems through Virginia, North Carolina and Georgia. The first incident occurred on May 12 in a Greyhound bus terminal at Rock Hill, South Carolina when three riders were viciously attacked for trying to use the “white only” restroom. On May 14th as the group reached Atlanta they split in two, one group continued on the Greyhound bus and the other on a Trailways bus. 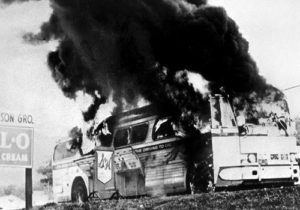 On May 14, 1961 the Freedom Riders bus was bombed near Anniston, Alabama by an angry mob.

On May 14, 1961 as the Greyhound bus was arriving at the bus station in Anniston, Alabama, a mob of about 200 people armed with iron bars, clubs blackjacks and tire chains was waiting for them. The driver drove passed the station but the mob followed. About 6 miles outside of Anniston the tires went flat and the driver had to stop at a gas station. The mob broke windows and threw a firebomb, fortunately all passengers managed to escape before the bus burst into flames.

When the second group in the Trailways bus arrived in Birmingham they were met by a mob of about 30 people. Some riders were badly beaten and there were no police within sight. The police commissioner told reporters that his officers had the day off since it was mother’s day.

Photographs of the burning Greyhound bus were published in the front pages of every major newspaper drawing national and international attention. Sympathy for their cause was growing exponentially.

Unfortunately the group was unable to continue their trip as they could not find a bus driver. Their journey was cut short but a new phase of Freedom Rides was born. 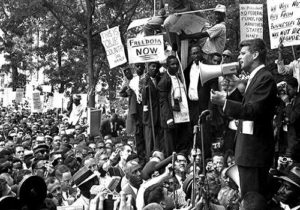 Supported by the Student Non Violent Coordinating Committee (SNCC) another group of Freedom Riders was formed with eight black and two white riders who were to continue the journey. As they headed from Nashville to Birmingham they were arrested and taken into protective custody. US Attorney General Robert Kennedy, brother of President John F. Kennedy, negotiated with the Governor of Alabama and the bus company protection for the new group. The Greyhound bus was escorted by police until they reached the Montgomery bus terminal where they were met by a mob. The police abandoned the bus and passengers were viciously attacked. President Kennedy sent 400 U.S. Marshalls to protect the group’s final leg of their journey.

In the meantime Martin Luther King was addressing a mass rally on support of the Freedom Riders at Ralph Abernathy’s First Baptist Church. It was estimated that at least 1,500 people gathered at the church. The church was attacked by angry segregationist, windows smashed and people lynched. The federal marshals moved in to disperse the mob. 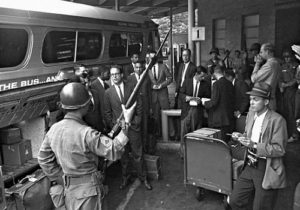 On May 24, 1961 Freedom Riders were preparing to board the bus in Montgomery. This time they were protected by the National Guard.

On May 24, 1961 Freedom Riders continued their journey from Montgomery to Mississippi protected by the National Guard and state police. Once they arrived in Jackson, they were arrested for attempting to use white facilities, charged for trespassing and taken to Parchman Penitentiary as they refused to pay the fine. Throughout the summer more riders arrived in Jackson and they were arrested attracting national and international media attention.

Robert Kennedy ordered the Interstate Commerce Commission to ban segregation by prohibiting carriers and interstate transit terminals from separating facilities on the base of color, religion, creed or national origin.