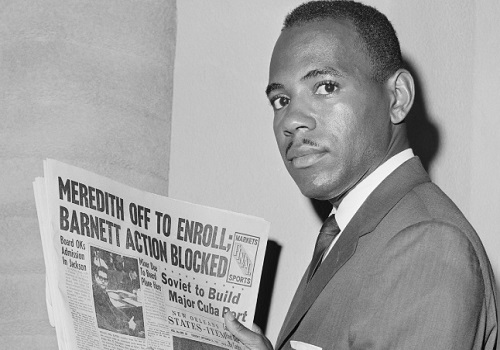 The intervention of the federal government in James Meredith’s admission to the University of Mississippi was a flash point in the Civil Rights Movement.

James Meredith was born in Mississippi on June 23, 1933. He served in the Air Force from 1951 to 1960, upon returning home he enrolled at Jackson State College in Mississippi. Inspired by John F. Kennedy inauguration speech about human rights he applied to the then segregated University of Mississippi known as Ole Miss.

Brown v. Board of Education

In 1954 the Supreme Court case Brown v. Board of Education declared that segregation in public education and other facilities violated the 14th amendment. It legally ended discrimination and the application of Jim Crow laws and overturned the separate but equal policy of Plessy v. Ferguson. However many universities and schools in the south had ignored the law while others were slowly desegregating. 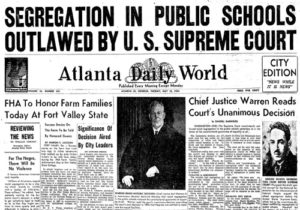 Headline in the Atlanta Daily World on May 12, 1954. The Supreme Courts orders desegregation of schools.

Meredith with the help of the National Association for the Advancement of Colored People (NAACP) Legal Defence Fund filed a lawsuit in the Southern Court of Mississippi citing racial discrimination but it was dismissed as it could not be proved his rejection was based on his color. The U.S. Court of Appeals for the Fifth Circuit reversed the decision and ordered the University of Mississippi to admit Meredith. The state appealed to the Supreme Court which supported the decision of the appeals court.

Ross Barnett, the governor of Mississippi was an ardent segregationist who declared that under his government schools will not be integrated. The board of the university gave Barnett full authority to act upon Meredith’s registration who again denied him admission against court orders. Barnett was found guilty of contempt, ordered to retreat or face arrest and a fine of $10,000 a day.

On September 30th, Meredith was escorted by 300 federal marshals to campus where he was met by a mob of 2,500 mostly from off campus, of the 200 arrested only 24 were students. The riots were growing more intense and President Kennedy ordered federal troops to move in.

On October 1st 1962 James Meredith was registered as a student in the University of Mississippi. About 5,000 guardsmen patrolled the city until the end of the month to ensure the safety of its residents.

Meredith graduated on August 1963 with a bachelor degree in political science. He continued his studies in the University of Ibadan, Nigeria where he got a master’s degree in economics and in 1968 a law degree from Columbia University.