In 1961 Albany, Georgia, was a small town of 56,000 people where 40% were African American. In August 1961 a group of students from Albany College led by the Student Nonviolent Coordinating Committee (SNCC) decided mobilize the black community and start a voter registration drive in Albany and communities with African American majorities. They also staged sit-ins at bus stations to test the compliance with the Supreme Court barring discrimination in interstate bus and train stations. 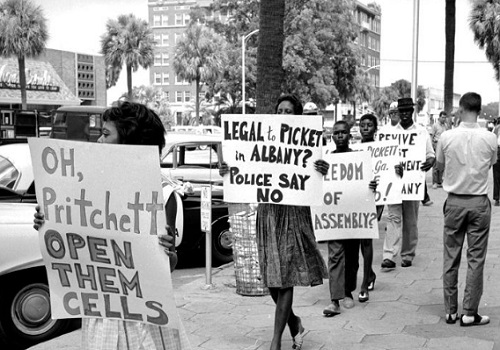 People protesting against the City of Albany’s decision to jail protesters without a license.

The creation of the Albany Movement

At the end of 1961 African American leaders in Albany felt that there was a need to coordinate separated efforts from numerous groups protesting for desegregation therefore the Albany Movement was formed. The main organizations included the NAACP and its youth league, Ministerial Alliance, Federation of Women’s Clubs, Negro Voters League and Criterion Club. The Albany Movement was led by Dr. William Anderson. 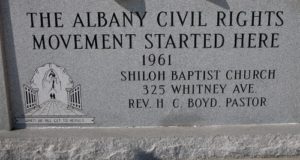 A memorial of the Albany Movement at the Shiloh Baptist Church.

The first mass meeting of the Albany Movement was held on November 25 in Shiloh Baptist Church and was triggered by the arrest of five black students staging a sit-in at the Trailways bus station lunch counter. The students were expelled from Albany State and a mass march was organized to demand the students return to school. The meeting and the march were held after the SNCC notified the Department of Justice that the city of Albany did not follow the Interstate Commerce Commission ruling which prohibited discrimination in interstate bus and railway stations.

Other activities of the Albany Movement included a series of mass marches protesting the arrest of a group of Freedom Riders coming from desegregated Atlanta to Albany. As the ten riders arrived in Albany’s Central Railway Station, five whites riders entered the black section and five black riders the white section. They were immediately arrested for trespassing and there was no violence on the part of the Freedom Riders. During the marches for their release there were 200 arrests and by December 15, 1961 there were 500 people in jail who refused to be bailed. 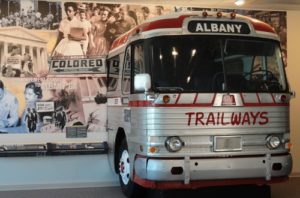 A display of the importance that Albany, Georgia had in the the Civil Rights Movement at the Albany Civil Rights Institute.

As protests increased and were gaining momentum, the president of the Albany Movement, Dr. William Anderson, invited Martin Luther King Jr. to address a mass rally. King gave a speech in front of over 1,000 protesters and led a 250 people march to Albany City hall. The demonstrators and their leaders including King were arrested for marching without a license. They refused to be bailed and King vowed to stay in jail until demands for disintegration were met. During his stay in jail the local Albany Movement leaders cut a deal with the government. The government promised to release demonstrators on bond, disintegrate train and bus facilities, and listen to their demands. King or the Southern Christian Leadership Conference (SCLC) were not part of the negotiations.

Weeks later it became obvious that the city was not going to hold its end of the promise failing to enforce desegregation in bus and train terminals. The Albany Movement ended in August 1962 and did not accomplish many of its goals at the moment. However a flame was ignited in Albany’s black population to challenge segregation rules in the late 60s and 70s. The Albany Movement was a learning curve and provided a valuable lesson for King and his supporters who were to face a similar situation in Birmingham.

King attributed the failure of the Albany Movement to a lack of planning and a not so clear protest strategy.