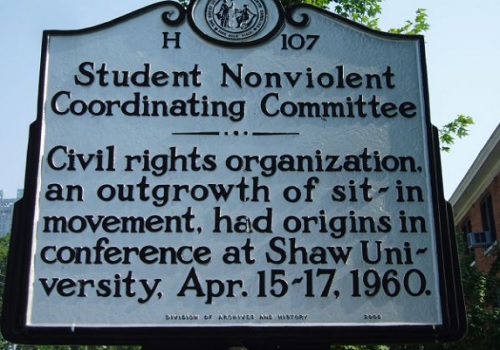 The Student Nonviolent Coordinating Committee or SNCC was one of the key organizations that participated in the Civil Rights movement of the 1960’s. It was born from student led sit-ins protesting against segregation in lunch counters in North Carolina and Tennessee.

In April 1960, Ella Baker, one of the most influential women in the Civil Rights movement and one of the founders of Southern Christian Leadership Congress (SCLC), met with students from Southern black colleges who had participated in sit-ins to discuss their experience. They met in Shawn University in Raleigh, North Carolina and lasted three days during which they discussed nonviolent forms of resistance and the choice of jail over bail. 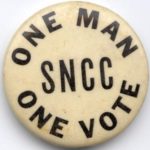 The first activities of the newly formed SNCC concentrated on sit-ins which spread from Virginia and South Carolina to eventually to 54 cities in 9 states. The SCLC trained students to resist all sorts of violence against them from lynching, clubbing or bullying, it also organized students into groups to lead sit-ins.

Sit-ins inspired another form of protests such as Freedom Rides to protest against segregation in interstate transportation. SNCC worked together with Congress of Racial Equality (CORE) providing volunteers to participate in interracial Freedom Rides to test and challenge segregation laws in bus and railway stations and terminals.

By mid 1961 SNCC participated in the Albany Movement. They focused on challenging the Interstate Commerce Commission and the law that had just been passed barring segregation in interstate bus and train stations. They challenged the law by sitting down in the whites-only waiting rooms and resisting to leave. They also focused on voter registration drive in Albany. Many students and civil rights leaders including King and Abernathy where jailed and refused bail.

The organization decided to focus its energy on voter registration. In 1962 the SNCC and other civil rights groups founded the Voter Education Project (VEP) focusing on Mississippi where registration drives were the lowest in the south. The following summer they launched an ambitious voting rights project known as Freedom Summer. About 700 students black and white came to Mississippi.

Following the passage of the 1964 Civil Rights Act, the movement went to Selma where King and SNCC workers tried to raise awareness for a strong civil rights law to end voter registration obstacles.

In 1966 SNCC changed directions when Stokely Carmichael was elected chairman. He embraced the Black Power Movement and endorsed the use of violence in self-defense. He promoted separatism and an all black membership. Up to that point SNCC had followed the doctrine promoted by King, that of non-violence. Carmichael renamed the organization Student National Coordination Committee. By the late 1960s after King’s assassination and violent riots the organization dissolved.

We affirm the philosophical or religious ideal of nonviolence as the foundation of our purpose, the presupposition of our faith, and the manner of our action. Nonviolence as it grows from the Judaeo-Christian tradition seeks a social order of justice permeated by love. Integration of human endeavor represents the crucial first step towards such a society. W Through nonviolence, courage displaces fear; love transforms hate. Acceptance dissipates prejudice; hopes ends despair. Peace dominates war; faith reconciles doubt. Mutual regard cancels enmity. Justice for all overcomes injustice. The redemptive community supersedes systems of gross social immorality. Love is the central motif of nonviolence. Love is the force by which God binds man to himself and man to man. Such love goes to the extreme; it remains loving and forgiving even in the midst of hostility. It matches the capacity of evil to inflict suffering with an even more enduring capacity to absorb evil, all the while persisting in love. By appealing to conscience and standing on the moral nature of human existence, nonviolence nurtures the atmosphere in which reconciliation and justice become actual possibilities.