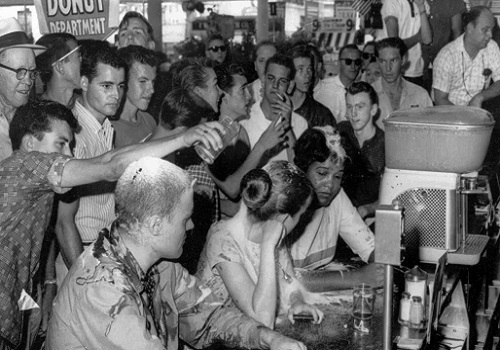 Many African Americans inspired by the Brown decision, the unjust murder of Emmett Till and the courage of Rosa Parks had been waiting for faster progress in school desegregation and civil rights reforms. College students were eager to join the movement and adopted a new non-violent tactic inspired by the teachings of Martin Luther King Jr., based on the philosophy of Gandhi and Jesus. It consisted in peacefully and patiently sitting at segregated locations such as lunch counters, movie theaters, parks and other public places.

Protests were well organized, students were coached by SNCC’s leaders to remain calm as angry crowds threw food and insulted them. One of the early organizers was James Lawson, a theology student from Vanderbilt who came up with the following rules: “Do show yourself friendly on the counter at all times. Do sit straight and always face the counter. Do not strike back or curse if attacked. Do not laugh out. Do not hold conversations. Do not block entrances.”

As early as 1947 students had led sit-ins but it was in Greensboro, North Carolina where it caught the nation’s attention. 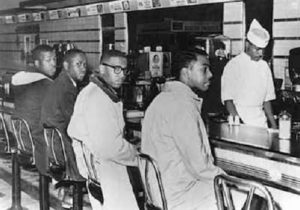 Students challenging segregation laws in a lunch counter in Greensboro, NC,  known as the Greensboro Sit-In.

On February 1, 1960 four African American freshmen from North Carolina Agricultural and Technical (A&T) College walked into the Woolworth lunch counter in Greensboro and tried to place an order.  The waitress told them to leave as they did not serve colored people. Ezell Blair Jr., Franklin McCain, Joseph McNewil and David Richmond did not leave instead they remained patiently seated until the store closed at 5:30pm. The following day they returned and brought 20 more students. On the third day they were joined by three white students from the University of North Carolina and 60 more students from Bennett College and North Carolina A&T. They occupied 63 of the 66 seats at the Woolworth lunch counter.

Consequences of the Greensboro sit-in 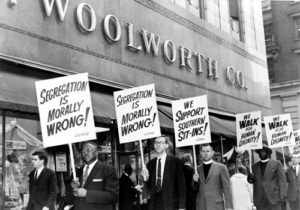 People protesting outside Woolworth Department Store in Greensboro, North Carolina. Woolworth desegregated its lunch counter in the Summer of 1960. It was followed by other businesses.

News of the Greensboro sit-in spread rapidly throughout the South. Within two weeks sit-ins were organized in Virginia and South Carolina; and within two months it had spread to 54 cities in nine states. It is estimated that more than 2000 people were arrested and charged with disorderly conduct.

Students gathered at a conference organized by Ella Baker, director of the Southern Christian Leadership Conference (SCLC), to share experiences in sit-ins and to coordinate future activities. The conference concluded with the formation of a student led group, the Student Nonviolent Coordinating Committee – SNCC.

Another sit-in that gained prominence was the Rich’s department store in Georgia where Martin Luther King Jr. and 36 students were arrested for trespassing. The group declared “rather jailed than bailed”. Atlanta mayor negotiated a two-month truce, charges were dropped against the students and were released. On the other hand, Dr. King did not have the same luck, because he was arrested earlier for driving without a valid Georgia driver license and was in violation of his probation, he was sent to Reidsville State Prison for four months of hard labor. Robert Kennedy, the Attorney General, appealed to the judge and Dr. King was released.

In the summer of 1960 Woolworth’s lunch counter in Greensboro was desegregated and opened to all races. By the end of 1960 hundreds of other stores in the south had also changed their policy and welcomed people from all colors and backgrounds.

The non-violent tactics of sit-ins had earned the civil rights movement a strong momentum and helped them win supporters across the nation. They inspired activists to test rights they had won in the court of law such as the adherence of the Supreme Court ruling on interstate transportation in southern cities also known as Freedom Rides.