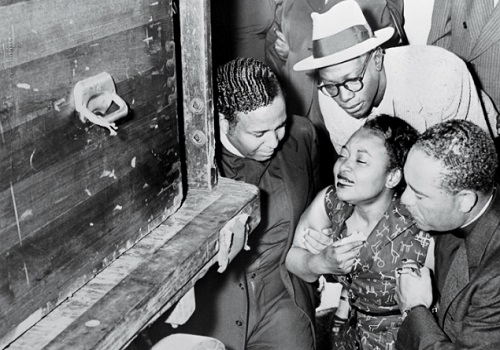 Mamie Bradley Till, mother of Emmett Till, in her son’s funeral.

His mother insisted in displaying his son’s body in a glass topped casket so that the world could see his badly beaten body. More than 2,000 people attended Emmett Till’s funeral.

Emmett Till was a 14 year old African American boy from Chicago who was visiting relatives in Mississippi where he was kidnapped and murdered for flirting with a white woman. His killers were acquitted of murder and kidnapping, they were let go free. The trial of Emmett Till’s murderers attracted media attention like never seen before and ignited activism in a younger generation such as Martin Luther King Jr., Ralph Abernathy and young lawyers of the NAACP.

Emmet Till’s mother, Maime Bradley Till, was originally from Tallahatchi County, Mississippi, when she was two years old her parents moved to Chicago to seek a better life. Emmett’s  father, Louis Till, a native of Missouri and a soldier, died in Europe in 1945. 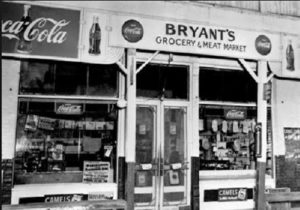 Bryant’s Grocery & Meat Market where Emmett Till whistled at a white woman.

In the summer of 1955, Emmett Till and his cousin, Curtis Jones, boarded a train to visit his great uncle, Mose Wright, in Leflore County, Mississippi. Even though Emmett attended an all black school in Chicago, things were different in Mississippi, segregation and discrimination were at a different level.

On the evening of August 24, Emmet and other teenage boys drove to Bryant’s Grocery and Meat Market located in Money in Leflore County. The store was owned by Ron Bryant and his wife, Carolyn Bryant. Emmett boasted to be dating a white girl in Chicago while his friends dared him to go inside the store and ask Carolyn Bryant for a date. At the time Ron Bryant was away in Texas and Carolyn was accompanied by her sister in law. Emmet walked into the store and bought two cents worth of bubble gum as he was leaving he wolf-whistled at her and said “Bye baby”. 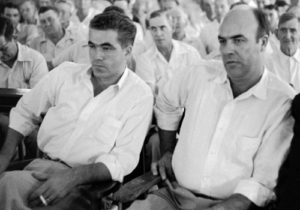 When Ron Bryant came back from Texas he took matters into his own hands. On August 28, accompanied by his brother in law, J. W. Milam, he drove to Mose Wright’s house and kidnapped Emmett. Bryant advised Mose to keep away from the authorities if “he wanted to live to be sixty five”.

Bryant and Milam viciously beat Emmett and then drove him to the Tallahatchie River where they undressed him and tied a 100-pound cotton gin fan around his neck. Milam then fired a bullet at Emmett Till’s head and dumped his body in the river.

Mose Wright did not go to the police that night but Emmett’s cousin Curtis Jones did. Bryant and Milam were arrested and charged of kidnapping. Three days after Emmett’s murder a fisherman found a decomposed body in the river, the body was in such a bad state that it could not be recognized as Emmett’s. The only way it was known to be his was by a ring recovered from one of his fingers, it was inscribed “L.T. May 25, 1943”. The ring was Emmett’s father’s, Louis Till.

Emmett’s body was buried in Chicago. His mother wanted an open casket funeral so that the entire nation could see what these men had done to her son and to demand justice. 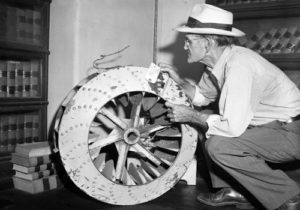 A cotton gin fan presented as evidence in the trial for the murder of Emmett Till.

The trial of Bryant and Milam started on September 19, 1955. It attracted media attention like never before.

The jury was all white, no surprise since there were no African Americans registered to vote in the county. The prosecution presented three witnesses. Mose Wright testified that Emmett had been kidnapped by Bryant and Milam. Willis Reed had seen Emmet in Milam’s truck and heard the beating in his barn. Amanda Bradley had also heard the beatings.

On September 23 the jury reached a verdict after one hour of deliberation and found Bryant and Milam not guilty. The jury believed the prosecution failed to prove that the body was Emmett Till’s.