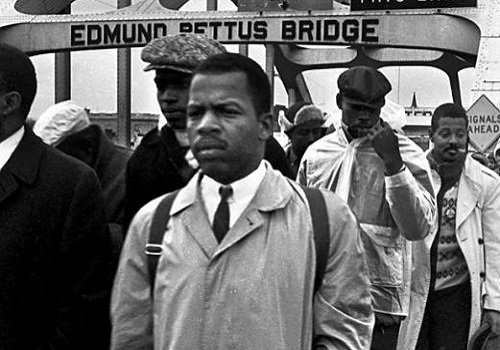 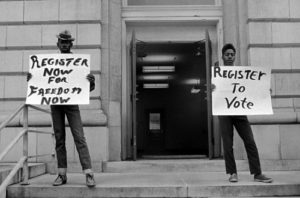 After the passage of the Civil Rights Act of 1964, civil rights leaders decided to concentrate their efforts on voting rights, especially in those areas in the black belt where voting registration remained low despite their efforts. They chose the city of Selma in Dallas County, Alabama. Selma had a black majority with 57% of its population but only comprised 3% of voters. Dallas County officials had used different means of intimidation and violence to prevent blacks from registering. Civil rights leaders thought that a voter registration campaign would attract national attention and pressure president Johnson into passing a much needed voting legislation.

Martin Luther King Jr.. gathered Student Non-Violent Coordinating Committee (SNCC) workers to lead people to register, hundreds showed up but they were arrested, among them Luther King himself. The arrest of the Nobel Peace Prize winner caught the attention of the media which covered mass arrests and beatings of peaceful protesters. During a protest in nearby Marion, Alabama a demonstrator, Jimmie Lee Jackson, was shot in the stomach by an Alabama police officer, he died a few days later.

The March and Bloody Sunday 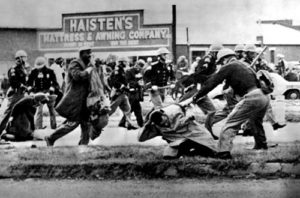 To protest against police brutality and the denial of voting rights King organized a march from Selma to Montgomery, a 50 mile, four day march starting on the Edmund Pettus Bridge in Selma to the state capitol in Montgomery.

On Sunday, March 7, 1965 about 600 people set to march to Montgomery, the group was led by Hosea Williams and John Lewis. At the other side of the Edmund Pettus Bridge more than 100 Alabama troopers were blocking their way. The marchers were advised to turn around to avoid confrontation when suddenly they were brutally attacked. The violence was recorded by the media and broadcast throughout the nation the incident became known as “Bloody Sunday”.

On Tuesday, March 10, King led a march of almost 1,500 people to the Edmund Pettus Bridge but did not complete the march to Montgomery. The group turned around after a prayer. The march is known as Turn Around Tuesday. 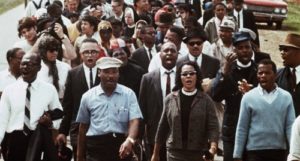 Martin Luther King Jr with his wife,Loretta, leading the 54 mile march from Selma to Montgomery.

On Wednesday, March 17, permission was granted to allow the march to resume from Selma to Montgomery. As the governor of Alabama, George Wallace, disagreed on allowing state troopers to participate, President Johnson federalized the Alabama National Guard. About 2,000 Army troops, 100 federal marshals and 100 FBI agents were dispatched to protect the marchers. More than 3,000 participated in the march that took place on Sunday March 21. They arrived at Montgomery capitol on Thursday, March 25.

The incident in Selma precipitated the passage of the Voting Rights Act by President Johnson. The president gained bipartisan support and the bill was quickly approved by the House and the Senate by a four to one margin. The bill was signed into law on August 6, 1965.

Martin Luther King Jr with his wife,Loretta, leading the 54 mile march from Selma to Montgomery.