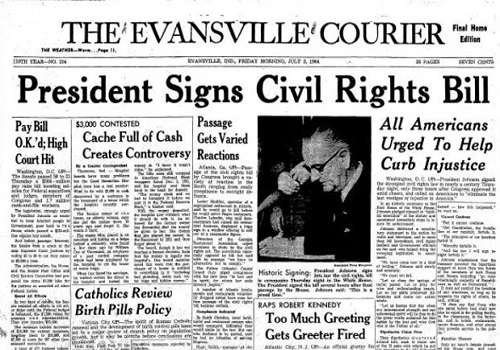 The Evansville Courier headline describes the signing of the Civil Rights Act of 1964 by President Lyndon Johnson.

The Civil Rights Act of 1964 is a landmark piece of civil rights legislation; it was originally proposed by President Kennedy on June 19, 1963 and was signed into law on July 2, 1964 by President Lyndon Johnson.

Civil Rights activists had been pushing society and politicians into supporting the legislation, the March for Jobs and Freedom also known as the March on Washington DC  solidified their commitment for change into the souls of Americans.

The assassination of President Kennedy was a setback for civil rights activist and supporters of the legislation. News of Kennedy’s death was received with cheers because of his support for civil rights. His successor, Lyndon Johnson, a southerner from Texas, insisted that the bill be passed without any compromises

The voting rights section of this Act was seen as lacking strength by civil rights activist which led to the Selma to  Montgomery March and Bloody Sunday. As a result the Voting Rights Act of 1965 was  passed the following year.