By the end of 1877 southern states were replacing Reconstruction governments for more conservative ones. Improvements in the African American community were reversed as states began to pass their own laws discriminating against persons of color, these laws were known as Jim Crow. Across the South new state legislation rejected three constitutional amendments and two Civil Rights Acts. 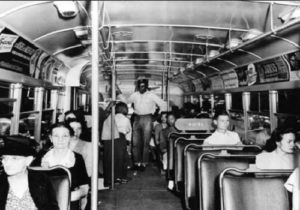 African Americans were allowed only at the back of the bus

In 1890 a bill segregating railroads cars, similar to the one adopted by Florida, was proposed before the Louisiana legislature. Despite the 16 African Americans in the state assembly the bill was passed into law which became known as the Jim Crow Car Law. Under this law railways should offer separate cars or separate sections for whites and colored passengers. If passengers broke the law they were fine $25 or given a 20 day sentence. 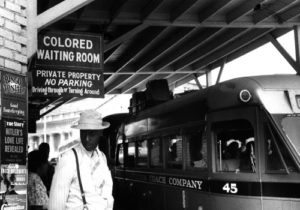 Plessy v Ferguson held that as long as equal facilities are provided for whites and colored people, segregation did not violate the Fourteenth Amendment.

In 1892 Homer Plessy, a mulato who was 7/8 white, was arrested for riding on a Louisiana train in the section reserved for “whites only”. With the help of Albion W. Tourgée, a radical Republican lawyer, Plessy sued the state against the Separate Car Law arguing that the law was unconstitutional. The “separate but equal” doctrine violated his rights to equal citizenship and equal protection of those rights under the 14th Amendment, therefore its unconstitutionality. The Judge, John Ferguson, ruled against him and upheld the state law. Plessy appealed to the Supreme Court. In 1896 the Supreme Court sustained the constitutionality of the case known as Plessy v Ferguson. Seven members rejected Plessy’s argument, one supported his argument and one did not participate.

”Legislation is powerless to eradicate racial instincts or to abolish distinctions based upon physical differences, and the attempt to do so can only result in accentuating the difficulties of the present situation. If the civil and political rights of both races be equal, one cannot be inferior to the other civilly or politically. If one race be inferior to the other socially, the Constitution of the United States cannot put them upon the same plane.”

The decision in the Plessy v Ferguson case upheld and strengthened segregation and Jim Crow Laws across the South. Segregation laws became an American institution which would live until 1954 when the case was reversed in Brown v Board of Education of Topeka.