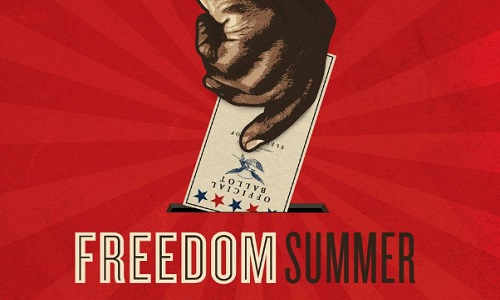 Freedom Summer was a voter registration project in Mississippi in the summer of 1964.

In 1962 the Voter Education Project (VEP) was founded with the financial support of the Federal government. Its objective was to increase voter registration in the African American community. In two years across the South over 38.6% of those eligible were registered to vote which was considered a great achievement. However, the only state where voter registration was low and discouraging was in Mississippi where only 3,871 out of 394,000 African American adults registered. Consequently, in 1963 VEP decided to concentrate its efforts in Mississippi.

Members of the NAACP, CORE, SCLC and other organizations organized the Council of Federated Organizations (COFO) out of which the Mississippi Freedom Democratic Party was born. 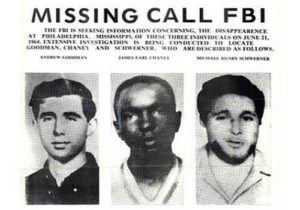 The bodies of these three volunteers were found by the FBI.

The Mississippi Freedom Summer Project involved hundreds of student volunteers, black and white, who came from different parts of the country to educate and encourage registration and support for the Freedom Democratic Party candidates. Most were middle class and came from northern colleges. By June 1964 about 700 students attended a two-week training session at the Western College for Women at Oxford, Ohio; they were mostly white and lived with local African American families.

On June 21th a group of three young men disappeared , Andrew Goodman, 21, student from Queens College; Michael Schwerner, 24, New York social worker; and James Chaney, 21, CORE worker from Mississippi. They were sent to investigate a burned out church in the outskirts of Meridian and they were arrested for speeding. The last time they were seen was when they were released from jail that night. Their bodies were found by the FBI in early August. The wave of intimidation and fear against students sent only a few back home while the majority of them stayed.

The Freedom Summer Project was successful at establishing 50 Freedom Schools to provide remedial education for the young and programs at community centers where adults got educated about voting.

The Mississippi Freedom Summer Project deepened the division between two views, that of Martin Luther King of integration and non violence, and that of a younger generation who doubted on peaceful means to achieve equality.