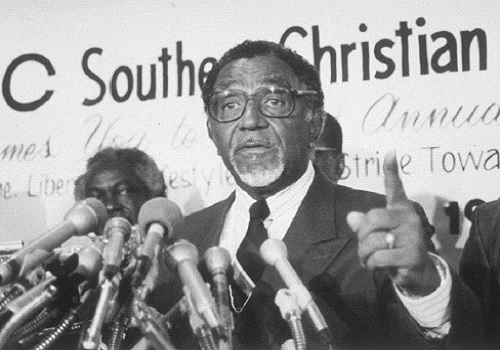 The Southern Christian Leadership Congress is a civil rights organization that originated during the Civil Rights Movement of the 1960s. The organization in composed of chapters and affiliates from all over the United States and has its headquarters in Atlanta, Georgia. Its objective continues to be the use of non violent action to achieve economic, social and political justice.

The SCLC was created from the network of churches that supported the Montgomery Bus Boycott in Montgomery, Alabama. The boycott began when Rosa Parks, an African American seamstress, was arrested for sitting in the white-only section of a segregated bus and refusing to move to the black-only section. The African American community reacted by declaring a boycott of public transportation buses that lasted 381 days. Local ministers created the Montgomery Improvement Organization or MIA to coordinate the boycott and elected Martin Luther King Jr. as their president.

Leaders of churches that supported MIA saw the need to expand and coordinate their efforts in other communities and created SCLC under the leadership of Dr. King. The SCLC believed in non violence resistance based on the teachings of Jesus Christ.

The SCLC became one of the most important civil rights organizations of the 1960s and worked together with other organizations such as CORE, NAACP, SNCC and others. Its first non violent mass rally was during the Albany movement where King and Albernathy were jailed. The Albany Movement had mixed results but managed to raise awareness.

It was followed by the Birmingham Campaign aimed at boycotting segregated businesses in the downtown area. The rally turned violent when protesters were blasted with water hoses, beaten and attacked by police dogs. Over one thousand students were arrested and the violence was broadcasted nationally and internationally putting pressure on the government to negotiate a settlement.

The SCLC and other civil rights group believed that true freedom would not be realized until the black man is given the right to vote. On January 2, 1965 a few weeks after accepting the Nobel Peace Prize Martin Luther King Jr. announced marches to places of voter registration. One such place was Selma where marchers including King were attacked and lynched. Following the Selma to Montgomery March pressure was on President Johnson to gain bipartisan support for the Voting Rights bill. It was passed by the House of Representatives by 328 to 74 followed by the Senate by 79 to 18. The bill was signed into law on August 6, 1965.

Today the SCLC is focused on issues such as racial proﬁling, police brutality, hate crimes, and discrimination.