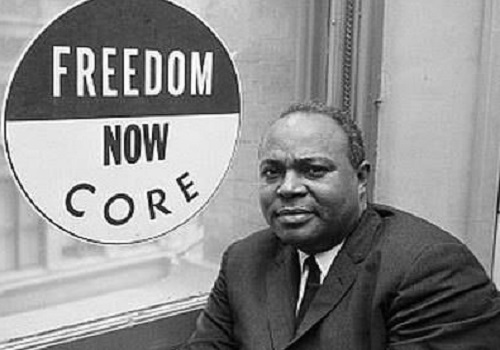 The Congress of Racial Equality or CORE is an African American Civil Rights group that played a major role in the Civil Rights Movement of the 1960s. It was founded in Chicago in 1942 by Bayar Rustin, George Houser, Homer Jack and James Farmer as Committee on Racial Equality. Of the 50 original members 28 were men and 22 were women, about one third were black and two thirds white.

The success of CORE inspired Sit-ins naturally led to another form of peaceful protest known as Freedom Rides. CORE, under the direction of James Farmer, played a pivotal role in the 1961 Freedom Rides by providing volunteers to participate in interracial bus rides testing discrimination in bus stations and terminals. The goal was to test the authority’s compliance of the Boynton v. Virginia Supreme Court ruling against segregation in buses, trains and terminals. They also tested Jim Crow laws in restaurants, bathrooms and sitting rooms using Gandhi’s non-violence resistance.

In 1963 James Farmer of CORE, Martin Luther King Jr. of SCLC, Roy Wilkins of the NAACP, John Lewis of SNCC and Whitney Young of the National Urban League participated in the March on Washington for Jobs and Freedom to protest for equal job opportunity for African Americans. The march was attended by more than 250,000 people and accelerated the passage of the 1964 Civil Rights Act.

CORE and all other civil rights groups agreed on the significance of the ballot in real freedom for African Americans so they decided to concentrate on voter registration drives in the communities with low rate of registrations. In the summer of 1964 a campaign known as Mississippi Freedom Summer was launched by SNCC, CORE and SCLC. Close to 700 white and black students were involved. Mississippians considered it as an invasion and received students with hostility. On June 20, 1964 three CORE civil rights workers disappeared and were found dead in early August.

Currently CORE headquarters is located in Las Vegas, Nevada. Its objective is to bring non-violent political, social and economic change for the underprivileged and provide equal opportunity for all.