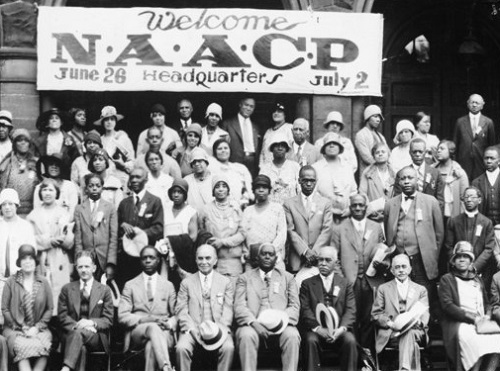 The NAACP was founded on February 12, 1909 in New York City by a biracial group concerned about the disenfranchisement of African Americans. The organization has roots in the Niagara Movement which established about 30 branches around the country but had little financial support. The NAACP was created to remove barriers of racial discrimination and prejudice. Its goal was to secure the rights of all people as guaranteed in the 13th, 14th and 15th Amendments to the U.S Constitution. Its mission states:

“To promote equality of rights and to eradicate caste or race prejudice among the citizens of the United States; to advance the interest of colored citizens; to secure for them impartial suffrage; and to increase their opportunities for securing justice in the courts, education for the children, employment according to their ability and complete equality before law”.

The organization’s first president was a famous white Bostonian lawyer, Moorfield Storey. Wiliam Edward Burghardt Du Bois (W.E.B Du Bois) was the only African American in the executive and was in charge of publicity and research. Du Bois was the editor of the NAACP’s publication, the Crisis, which had a monthly circulation of 35,000 copies by 1914.

The NAACP devoted much of its earlier efforts fighting federal anti lynching legislation and lobbying education. By 1914 its membership had grown to 6,000 members in 50 branches.

The NAACP played a major role in the in the African American Civil Rights movement of the 1950s participating and organizing sit-ins, bus boycotts, Freedom Rides, advocating for desegregated education and voting rights. Its Legal Defence Fund provided legal representation and paid bail for many protesters.