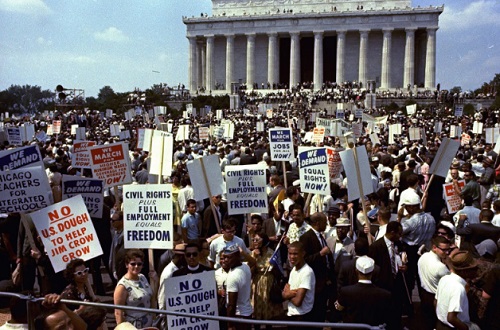 The March on Washington for Jobs and Freedom took place on August 28, 1963 in front of the Lincoln Memorial in Washington DC. The objective of the march was to pressure President Kennedy into initiating a Civil Rights bill which came to be the Civil Rights Act of 1964. It was organized by civil rights and religious groups and it is estimated that about 200,000 people attended it. The most memorable moment was the closing address by Martin Luther King Jr., “I have a dream”, a powerful speech of reconciliation and racial harmony. The March is one of the largest civil rights rallies in US history and an example on non violent mass actions. 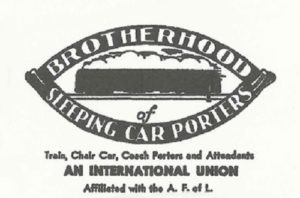 The BSCP was accepted into the American Federation of Labor in 1937, 13 years after its application.

The father of the March on Washington for Jobs and Freedom was Phillip Randolph who in 1941 organized the March on Washington Movement. Randolph was the founder and president of the Brotherhood of Sleeping Car Porters (BSCP), a union of African Americans porters working on railroad cars. In 1941 Randolph organized a march to demand more jobs for African Americans in the defense industry. As a response President Roosevelt issued executive order 8022 eliminating discrimination hiring practices in the defense industry and government based on race, creed, color or national origin. In return Randolph called off the march.

The 1963 March on Washington for Jobs and Freedom

The 1963 March on Washington was conceived by Phillip Randolph as a mass protest for fair treatment and equal opportunity for African Americans. In order to gain more supporters its goal was broadened to include demands for the passage of the Civil Rights Act which was stalled in Congress, demands included fair employment practices and integration of schools. President Kennedy tried to stop the march but ended up endorsing it. At the end of the March President Kennedy and Vice President Lyndon Johnson met with civil rights leaders in the White House where they discussed bipartisan support for civil rights legislation.

The March on Washington for Jobs and Freedom brought together many civil rights leaders and groups such as Phillip Randolph, the main organizer and president of the Brotherhood of Sleeping Car Porters (BSCP), Martin Luther King Jr. from the Southern Christian Leadership Congress (SCLC), James Farmer from Congress of Racial Equality (CORE), Roy Wilkins from the National Association for the Advancement of Colored People (NAACP), John Lewis from Student Non Violent Coordinating Committee (SNCC), and Whitney Young from the National Urban League. In June 1963 they formed the Council for United Civil Rights Leadership to oversee funding and communication. This group became known as the Big Six.

Coordination and logistics were the responsibility of Bayard Rustin, a veteran organizer of civil rights activities. His job consisted in getting people from all over the country peacefully into Washington and out of it in one day. Law enforcement included some 5,000 police officers and National Guardsmen. 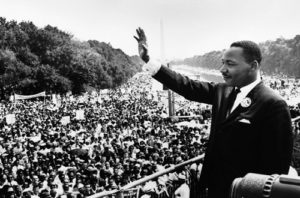 Martin Luther King Jr. addressing the crowd, he was the last of 10 speakers.

The March commanded national attention and television coverage from beginning to end. Groups marched from the Washington Monument to the Lincoln Memorial carrying pre-made placards:”Civil Rights Plus Full Employment Equals Freedom”,  “We Demand Voting Rights Now!”, “We Demand Jobs for All Now!”, “We Demand First Class Citizenship Now!”, “We Demand an End to Bias Now!”.

Ten speakers, representatives of sponsoring organizations, stood on the podium to give a fifteen minute speech. In order the speakers were: