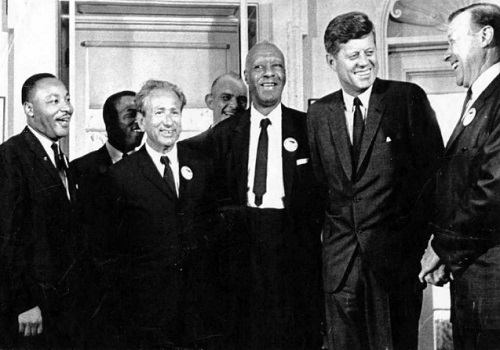 Philip Randolph standing next to President Kennedy in a meeting at the White House after the 1963 March on Washington D.C.

Philip Randolph (1889-1978) was one of the earliest civil rights activists of the 1950s. He was a leading African American labor unionist and a civil rights activist. He organized the Brotherhood of Sleeping Car Porters, the first predominantly African American labor union. He worked incessantly to support fair labor practices for people of color which led to the banning of discrimination in the defense industries during World War II and the end of segregation in the armed forces. He was the inspiration and one of the main organizers of the 1963 March on Washington.

Philip was the second of two sons, both attended the Cookman Institute in East Jacksonville, Fla., where they excelled. Randolph continued his post secondary education at City College of New York where he studied English literature and sociology.

In New York he worked as an elevator operator, a porter and a waiter. He founded an employment agency called the Brotherhood of Labor with Columbia University graduate Chandler Owen. Randolph and Owen founded The Messenger, a radical  political magazine that addressed social injustices of the African American worker and supported the inclusion of blacks in the arm forces and defense industry. He tried to organize African American shipyard workers in Virginia and elevator operators in New York City but were barred from the American Federation of Labor.

Randolph organized the Brotherhood of Sleeping Car Porters in 1925 but failed to gain acceptance into the American Federation of Labor. The Pullman Company was the largest employer of African Americans and was against the union. In 1937 after battling for 12 years the BSCP finally got acceptance into the AFL but a year later Randolph decided to withdraw the union from the AFL in protest for discrimination.

In 1941 Randolph warned the federal government that if discriminatory hiring practices of companies that received federal subsidies did not stop he and 50,000 African Americans would march on Washington D.C. This led President Roosevelt to promulgate Executive Order 8802 in June 1941 out of which the Fair Employment Practice Committee was born.

At the end of WWII Randolph organized the League for Nonviolent Civil Disobedience Against Military Segregation. This movement influenced President Truman to issue an executive order in 1948 banning racial segregation in the Armed forces.

In 1963 Randolph was one of the principal organizers of the March on Washington for Jobs and Freedom. The March drew a crowd of nearly 250,000 and was a historic day in the history of the African American Civil Rights Movement. It pressured President Kennedy into initiating a civil rights bill that became the 1964 Civil Rights Act.

In 1964 Randolph was presented with the presidential Medal of Freedom by President Lyndon Johnson for his social activism and civil rights struggle. He founded the Philip Randolph Institute to find the causes of poverty and to eliminate it.

Randolph died at 90 in his house in New York City on May 16, 1979. His ashes are interred at the A. Philip Randolph Institute in Washington D.C.