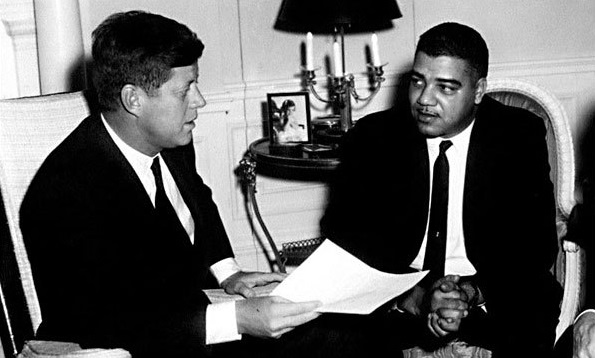 Whitney Young Jr. and President Kennedy in the White House.

Whitney Moore Young Jr. (1921-1971) was an American Civil Rights leader and head of the National Urban League. Young was a social worker who strove during his lifetime to end discrimination in the workplace and provide equal access to economic opportunity for those deprived and socially marginalized. In 1969 he was awarded the highest civilian award, the Presidential Medal of Freedom, by President Johnson for his commitment to civil rights.

Whitney Moore Young Jr. was born in Lincoln Ridge, Kentucky on July 31, 1921. He attended Lincoln Institute, a preparatory school where his father, Whitney M. Young Sr. was the principal and his mother, Lara Young, was a teacher.

Young was a remarkable student graduating as his class as valedictorian. He earned his bachelor degree in Social Work from Kentucky State University. During World War II he was trained as an electrician working in road construction in a crew of black soldiers where he was able to mediate between them and white officers. After the war he attended University of Minnesota where he earned a master’s degree in social work in 1947. During his studies he got involved with the National Urban League. 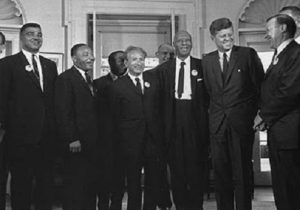 From left to right Whitney Young, Martin Luther King, Rabbi Joachim Prinz, A. Philip Randolph, John F. Kennedy and Walter Reuther. A gathering after the March on Washington for Jobs and Freedom.

In 1950 Young became president of the Omaha, Nebraska chapter of the National Urban League where under his leadership he tripled its membership and advocated for black employment in previously white reserved jobs. During this time he served as dean of the School of Social Work in Atlanta University and head of the NAACP local branch.

In 1961 Young was unanimously elected Director of the National Urban League. Under his lead the League raised funds from prominent white businessmen increasing its budget, staff and reach to the disenfranchised. He served as director until his death in 1971.

During his tenure Young brought the League to the forefront of the American Civil Rights movement. He expressed that the organization’s mission was to be “social engineers, to supplement and complement activities of other organizations, planners, people who work at the level of policy-making, policy implementation, the highest echelons of the corporate community, governmental community and labor movement”.

During his ten years as director he convinced major companies to hire more black labor. The National Urban League was one of the sponsors of the March for Jobs and Freedom on Washington DC.. Whitney is know as the powerbroker because he convinced many white businessmen and politicians to support the March on Washington. He was sought after as advisor on race and labor relations by Presidents Kennedy, Johnson and Nixon.

Young continued to work as Director of the Urban League until the day he died. He also served as President of the National Association of Social Workers from 1969 to 1971.

Whitney Young Jr. died on March 11, 1971 in Lagos, Nigeria while attending a conference sponsored by the African American Institute. He suffered a heart attack after swimming. His body is buried in Ferncliff Cemetery, Greenburgh, New York.