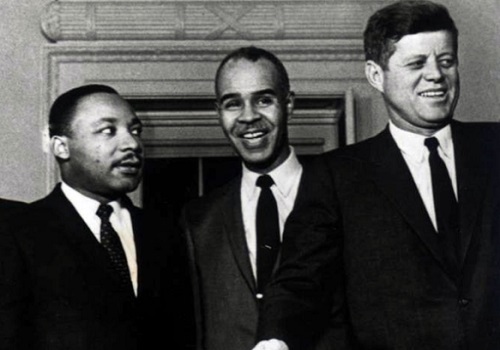 Roy Wilkins (1901 – 1981) was a prominent civil right activist, leader and journalist. He headed the National Association for the Advancement of Colored People (NAACP) where he headed efforts that led to significant civil rights legislation victories such as the 1954 Brown v. Board of Education case, Civil Rights Act of 1964 and Voting Rights Act of 1965. He was awarded the Presidential Medal of Freedom by President Lyndon Johnson for his work in civil rights.

Roy Wilkins was born on August 30, 1901 in St. Louis, Missouri. He grew up with his maternal aunt after his mother died when he was 4 years old. His father left before he was born.

Wilkins attended University of Minnesota where he graduated in 1923 with a bachelor’s degree in sociology and journalism. After graduation, Wilkins moved to Kansas City where he worked as an editor in the Kansas City Call. 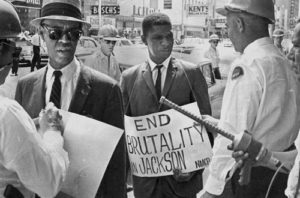 Roy Wilkins and Medgar Evers being arrested for protesting in Jackson Mississippi.

In 1931 Roy Wilkins moved to New York to work as an assistant to Walter White, executive secretary of the National Association for the Advancement of Colored People (NAACP). In 1934 he became editor of The Crisis, the official magazine of the NAACP, replacing founding editor W.E.B. Du Bois. Wilkins was a key player bringing the 1954 Brown v. Board of Education case to the Supreme Court and when Walter White passed, Wilkins was elected NAACP’s Executive Secretary in 1955.

The NAACP and Wilkins were key organizers of the March on Washington for Jobs and Freedom and important players promoting the Civil Rights Act of 1964 and the Voting Rights Act of 1965. He retired in 1977.

Wilkins retired from the NAACP when he was 76 years old. He spent his final years writing his autobiography, Standing Fast, which was published in 1982. Roy Wilkins died on September 8, 1981 in New York. He is buried in Pinelaw Memorial Park, East Farmingdale, New York.