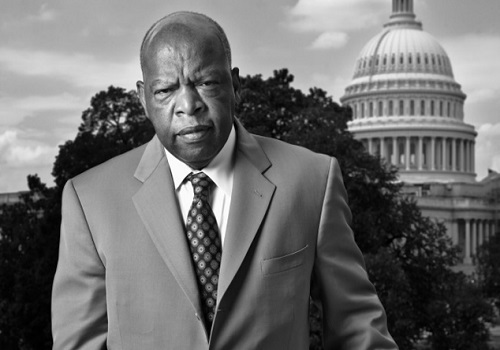 John Lewis has been serving in the U.S Congress since 1986 representing Georgia’s Fifth Congressional District.

John Lewis (1940) is one of the Big Six leaders of the Civil Rights Movement of the 1960s. He was chairman of the Student Nonviolent Coordinating Committee, participated in sit-in demonstrations, freedom rides, voter registration drives and was the youngest speaker at the 1963 March on Washington. Lewis has been serving in the U.S. Congress since 1986 representing Georgia. In 2010 he received the Presidential Medal of Freedom, the nation’s highest civilian honor for lifetime achievement.

John Lewis receiving the Presidential Medal of Freedom from President Obama in 2010.

John Lewis was born in Troy, Alabama on February 21, 1940. His parents were sharecroppers. He attended segregated Pike County Training High School in Brundidge, Alabama. Lewis continued his studies at the American Baptist Theological Seminary and at Fisk University in Nashville, Tennessee where he received his bachelor degree in Religion and Philosophy. It was during his university years when he got involved in civil rights activism.

From a young age he admired Martin Luther King Jr., his leadership and philosophy of nonviolence. He was involved in the establishment of the SNCC and the organization of Sit-in demonstrations. Lewis also volunteered in CORE organized Freedom Rides, risking his life to challenge segregation in interstate transportation; he was severely beaten and arrested. 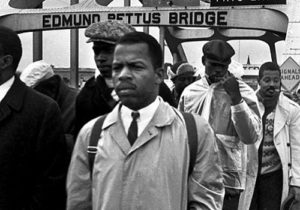 John Lewis crossing the Edmund Pettus Bridge on his way to Montgomery.

From 1963 to 1966 John Lewis served as chairman of the Student Nonviolent Committee – SNCC which helped organize students in civil right protests such as sit-in demonstrations, freedom rides, voting registration drives, peaceful marches and other activities.

Representing SNCC, at age 23, Lewis became the youngest speaker at the historic March on Washington in 1963 and was recognized as one of the Big Six leaders of the African American Civil Rights Movement. He left SNCC in 1966 to direct the Field Foundation and the Voter Education Project.

John Lewis, a Democrat, was elected to Congress in November 1986 representing Georgia’s Fifth Congressional District since then.

Lewis’ statement when Barack Obama won the presidency in 2008:

“When we were organizing voter registration drives, going on the Freedom Rides, sitting in, coming here to Washington for the first time, getting arrested, going to jail, being beaten, I never thought, I never dreamed of the possibility that an African American would one day be elected president of the United States.”