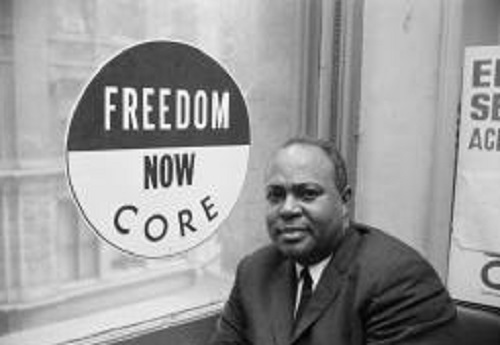 James Farmer was one of the founders of CORE and one of the most influential leaders of the Civil Rights Movement.

James Farmer (1920-1999) was one of the great leaders of the African American Civil Rights Movement of the 1950s. He co-founded the Congress of Racial Equality – CORE which became one of the leading civil rights organizations. Farmer was a pacifist, inspired by Gandhi’s philosophy of non-violence; he organized CORE under that philosophy. His organization pioneered Freedom Rides which led to interstate travel desegregation in the Deep South.

James Farmer was born on January 12, 1920, in Marshall, Texas. His father was James L. Farmer, a Methodist minister and professor at Wiley College and his mother, Pearl Houston, a school teacher. From young age he used his eloquence to excel in the debate team.

Farmer attended Wiley College where he earned his bachelor of science in 1938. Following his father’s steps he went to Howard University earning a degree in Divinity in 1941. In Howard he met Howard Thurman, a professor of theology, who inspired him to study Gandhi’s philosophy becoming interested in his non violent style of protest. Eventually Farmer decided not to follow a career in religion. 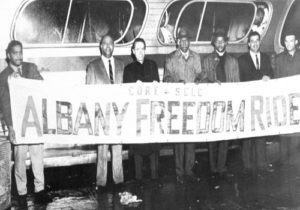 Farmer started his career in civil rights activism in 1942 when he and other colleagues founded CORE. CORE was a multiracial group committed to racial harmony and desegregation using Ghandian tactics of nonviolence.

In 1947 Farmer participated in sit-in demonstrations which led to desegregation of two restaurants in Chicago. Recognized by his leadership abilities Farmer was elected CORE National Director in 1961, during that decade CORE achieved national recognition and great successes.

Famer resigned from CORE in 1966 to lead a national adult literacy project. In 1969 he accepted a post in the Department of Health, Education and Welfare in Nixon’s government. He created several programs which increased African American employment in the administration but was disappointed by Nixon’s civil rights agenda.

He took a teaching position at Lincoln University near Philadelphia and served in different boards such as Fund for and Open Society and the Council on Minority Planning and Strategy.

Farmer wrote his autobiography in 1985, Lay Bare the Heart. He took a teaching position at Mary Washington College in Fredericksburg, Virginia. He retired in 1998 and died on July 9, 1999. He is buried in Central Texas State Veterans Cemetery in Bell County, Texas.