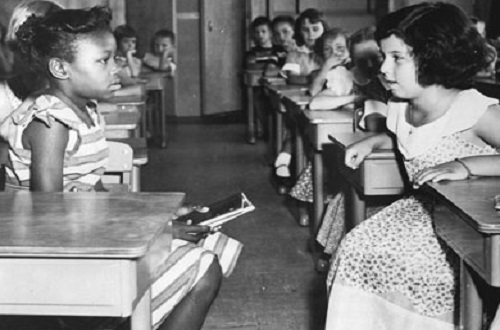 Five in One and the NAACP

The National Association for the Advancement of Colored People (NAACP) Legal Defense Fund sponsored the case and believed that the best strategy to overturn Plessy was to gather cases from several states that challenged different aspects of the law to make it difficult for the Court to make a limited decision. Brown v Board of Education comprised five cases: Brown itself, Briggs v. Elliot (filed in South Carolina), Davis v. County School Board of Prince Edward County (filed in Virginia), Gebhardt v. Belton (filed in Delaware), and Boiling v. Sharpe (filed in Washington D.C.). The cases were consolidated under the name of the first case the Court had decided to hear – Brown v. Board of Education of Topeka. 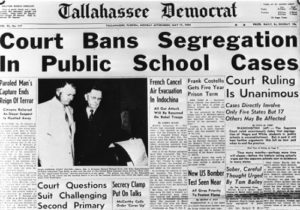 Headline of the Tallahassee Democrat dated May 17, 1954, covers the decision of the Supreme Court over school segregation.

Thurgood Marshall, who became the first African American Supreme Court justice in 1967, was the lead counsel for the Brown case. The Plaintiff was Oliver Brown father of Linda Brown, an elementary school student, who had been forced to travel to a far away school when an “all white” school was closer. Boiling v. Sharpe protested over crowded conditions in Washington D.C. schools, while Briggs v. Clarendon sued over underfunding of segregated schools in South Carolina. Davis v. County School Board of Prince Edward County was initiated by Robert Moton High School students who led a strike against the school and demanded equal facilities as those provided to white high school students. Gebhardt v. Belton was the only case that the Federal Court ordered African American children to be admitted to “whites only schools”. In all other cases Federal Courts found school segregation constitutional before appealing to the Supreme Court.

In all cases except for Brown, NAACP Legal Defence Fund lawyers presented evidence that segregated schools and their condition fostered feelings of inferiority and irreparable psychological damage among students. They also prepared evidence that segregated schools were understaffed and underfunded. The Brown case did not present such a case but the inability to attend schools closer to where they lived instead of traveling long distance to go to school. They called for schools to reverse its policy of racial segregation. 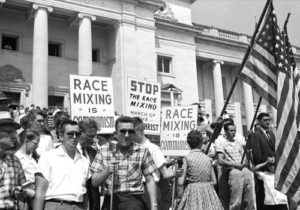 People in the South protesting against the decision of the Supreme Court banning segregation in schools.

The Supreme Court judges unanimously decided to overturn the provisions of 1896 Plessy v. Ferguson which under the Equal Protection Clause violated the Fourteenth Amendment. They sustained that black and white schools are not equal and demanded states to desegregate all public schools “with all deliberate speed”. Chief Justice Earl Warren delivered the Court’s decision:

“We conclude, unanimously, that in the field of public education the doctrine of ‘separate but equal’ has no place. Separate educational facilities are inherently unequal” 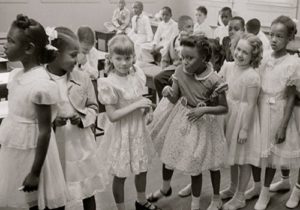 Students at a desegregated school.

Not everybody was happy about the Supreme Court decision. In the Deep South anti-integrationist sentiments emerged. Private schools for all white students were formed staffed with public school teachers, public schools were forced to close and many public schools continued to prohibit African Americans from joining them.

In 1956 politicians from southern states issued the Declaration of Constitutional Principles also known as Southern Manifesto denouncing the Supreme Court’s decision to breach states’ rights and accusing it of abuse of judicial power. The Manifesto was signed 19 senators and 77 members of the House of Representatives from Alabama, Arkansas, Florida, Georgia, Louisiana, Mississippi, North Carolina, South Carolina, Tennessee, Texas and Virginia.

The Manifesto laid the strategy to delay the end of Jim Crow. It would take many years and a many court battles to eliminate the legal barriers that southern states raised to impede integration. In the 1958 Cooper v. Aaron case the Supreme Court held that all states are bound by the Court’s decision and that its interpretation of the Constitution is the “supreme law of the land”.