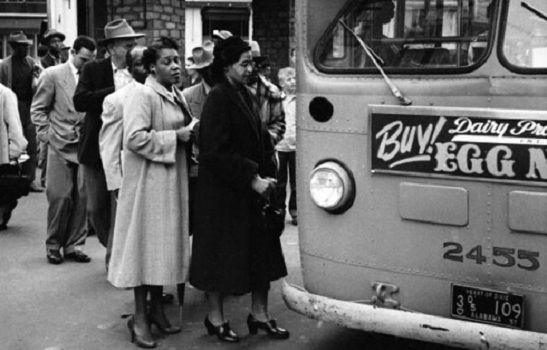 The Montgomery Bus Boycott was a protest in which African Americans refused to ride buses due to segregated seating in public transportation. It took place from December 5, 1955 to December 20, 1956 in Montgomery, the capital of Alabama. It all started on December 1, 1955 when Rosa Parks, an African American woman, refused to give up her seat in a city bus to a white man. She was arrested and fined. The boycott lasted 381 days and was organized by a network of Southern churches. The collective effort succeeded in bringing desegregation in the bus system in Montgomery and as a result the Southern Christian Leadership Conference (SCLC) was created. Martin Luther King Jr. was elected its president and became a national leader of the African American Civil Rights Movement. 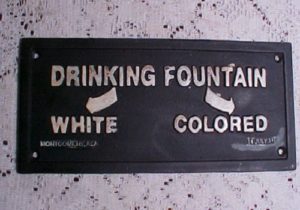 A sign in Montgomery, Alabama, showing separate drinking fountains for blacks and whites. These laws were known as Jim Crow laws.

Jim Crow laws were a set of laws in the south that discriminated against African Americans. These laws permeated their entire lives. Public transportation in the city of Montgomery was no different, black passengers were required to pay bus fares at the front and then re-board the bus at the rear. The first 10 front seats were reserved for “white passengers only”. African Americans had to seat at the back but if the seats reserved for whites were to capacity they had to yield their seats.

Rosa Parks was not the first person to have stood up against segregation laws in public transportation but she was the one that caught the attention of NAACP lawyers. The NAACP was looking for a case to challenge the bus segregation laws and recognized that Rosa Parks would be a most sympathetic defendant. 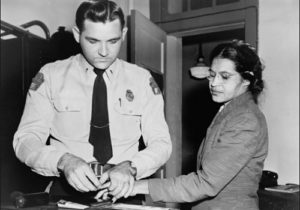 Rosa Parks was arrested for not yielding her seat to a white passenger.

On December 1, 1955 Rosa Parks, a seamstress, boarded the bus at Cleveland Ave and sat on seat 11, behind the row reserved for whites only. As the bus filled up the driver, James Blake, ordered all African Americans to move to the back and yield their seats to white passengers. Parks refused to move and was arrested by the police for violating the municipal code.

Rosa Parks was a former secretary of the Alabama State Conference of the NAACP, she also organized the NAACP Youth Council chapter in Montgomery. As news spread of her arrest NAACP lawyers started mobilizing the black community to protest for her arrest and segregation in public transportation. Parks was convicted and fined $10 plus $4 in court costs for violating the segregation laws.

E D. Nixon, a former president of the Alabama Chapter of the NAACP paid her fine and bond and used her arrest to raise awareness at segregation laws in the City of Montgomery. 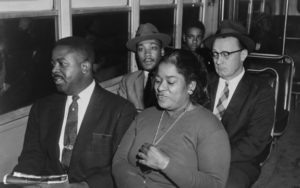 King riding a municipal bus after MIA’s victory over segregation in public buses.

Nixon thought that the best way to mobilize the community was by enlisting community leaders, among them were Martin Luther King Jr., Roy Bennett and Ralph Abernathy. The Montgomery Improvement Association (MIA) was created to prepare and organize the boycott and Reverent Martin Luther King Jr was appointed its president.

The organizers planned a one day boycott on Monday December 5, 1955. These and other clergy men spread the news of the boycott during their Sunday service. On the day of the boycott it is estimated that 90% of African Americans stayed off busses. They walked, took taxis, and rode bicycles or cap pooled. The Montgomery Boycott lasted an unprecedented 381 days.

On December 8, 1955 MIA leaders tried to negotiate with Montgomery Mayor, W. A. Gayle, and representatives of the bus companies. MIA presented its demands: the courteous treatment of black passengers; seating on a first come, first served basis with blacks filling the bus from the rear and whites from the front and no reserved seats; and hiring of black drivers on predominantly black routes.

City leaders and segregationist tried to intimidate boycotters, taxi drivers and car poolers while some were fired from their jobs. Tensions escalated and King’s and E. D. Nixon’s houses were bombed. King, 24 ministers and 64 other organizers were indicted for violating a 1921 law prohibiting boycotts. The trial started on March 19 and lasted 4 days attracting national attention. Twenty eight witnesses were called to testify the abusive treatment they had to endure by bus drivers. King was found guilty and ordered to pay a $500 and 386 days of hard labor. He was released on bond.

The NAACP Legal fund filed a federal civil action lawsuit two months after the boycott started bypassing the Alabama court system. Aurelia Browder, Susie McDonald, Mary Louise Smith and Jeanetta Reese were the plaintiffs who had been discriminated against bus drivers. On June 4, 1956 the federal district court decided that the Montgomery segregation law violated the due process and equal protection clauses of the 14th Amendment. The case was appealed to the Supreme Court.

On November 13, 1956 the Supreme Court ruled the segregation of buses unconstitutional but the boycott continued for another month until the order reached Montgomery. The city issued an ordinance authorizing passengers to seat anywhere they choose in the bus.

On December 21, 1956 history was made in Montgomery as Glenn Smiley, E. D. Nixon, Ralph Abernathy and Martin Luther King Jr. boarded the first desegregated bus in the city. Those who did not agree with the decision of the Supreme Court resorted to violence. Snipers fired at buses, blacks were lynched and churches were bombed.

The Montgomery bus boycott inspired other cities throughout the country and stimulated participation and activism. It also brought prominence to Martin Luther King Jr. who advocated for peaceful resistance.