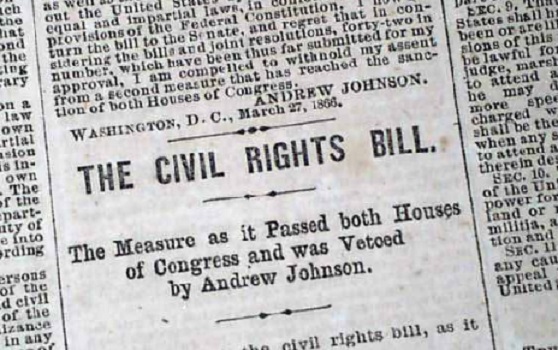 The Civil Rights Act of 1866 was enacted on April 9, 1866 by the United States Congress to protect the rights of  newly freed slaves. The passage of this Act over President Johnson’s veto was the first time Congress legislated upon civil rights.

Senator Lynman Trumbull sponsored the bill, congress gave it a clear majority with 122 to 41 supporting the Act. President Andrew Johnson vetoed the bill with this message:

To the Senate of the United States:

I regret that the bill which has passed both Houses of Congress, entitled “An Act to protect all persons in the United States in their civil rights, and furnish the means of their vindication,” contains provisions which I cannot approve, consistently with my sense of duty to the whole people, and my obligations to the Constitution of the United States. I am, therefore, constrained to return it to the Senate (the House in which it originated) with my objections to its becoming law.

Part of the Civil Rights Act of 1866 became part of the Fourteenth Amendment which was passed in 1868. This law failed to protect African Americans; segregation, racism and intimidation were common in the South. The emergence of the Ku Klux Klan spread more violence.